After lunch today, I set out for the Musée National du Moyen Âge to get my latest fill of Medieval Art. 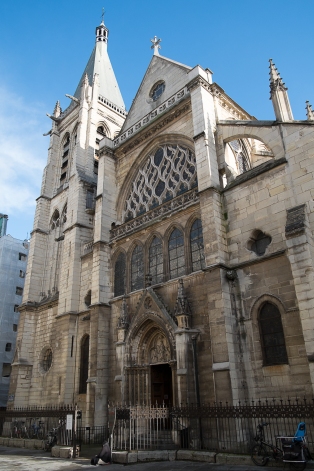 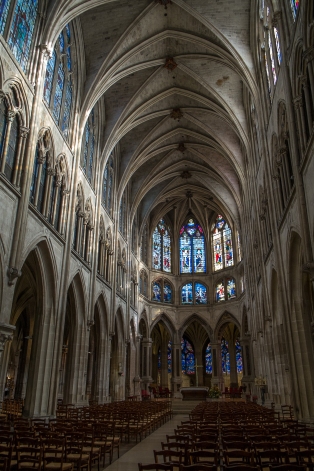 I wandered into a couple of churches today, really quite by accident. Well, let’s face it, if I see a church, I generally go inside. The first one I encountered on the way to the Cluny is near the Latin Quarter, St. Séverin. On the outside, especially from the back, you cannot miss the gargoyles. Once inside, the church is definitely Gothic with its tall vaulted ribs and illuminating stained glass.

Once again, as has been my Paris experience thus far, I arrived at a museum that was mostly closed. Nevertheless, I was able to see the famous unicorn tapestries representing the senses of touch, sound, sight, smell, taste, and the sixth is really up to our imagination. Most of the gallery information was technical including weaving terminologies. The tapestries are huge and beautifully restored. Most of the second floor is currently dedicated to a unicorn show. Carved ivories of Christian figures are well represented in the collection along with enamels and other decorative art forms. I am completely impressed with the imagination, ambition and craftsmanship displayed in this wonderful collection.

After I left the museum, I decided to wander a bit and headed into the direction of the Pantheon. I reached the summit, all pretty much enclosed by the University of Paris, and admired the imposing structure with its commanding frontal Greek portico, huge Corinthian columns, and towering dome that I can also see off in the distance from my studio window. Over to the left of the Pantheon, I could see just beyond a bunch of parked motorbikes, the façade of another church. So, I headed toward it.

As I walked into St-Etienne du Mont, I immediately knew that I was in a curiously unique architectural setting. Floating above me between the right aisle and the nave was a balustrade with a walkway. In fact, suspended architectural structures and spiraling elements seemed to surprise me everywhere I looked. I wandered back through the ambulatory, examining as many of the details as I could. The wonderful light that entered into this church pleased me along with the emphasis on Renaissance rounded arches.

The most surprising architectural feature is the rood screen, the only one still in existence in Paris. It traditionally separated the laypersons that attended mass from the religious. This architectural device has pretty much been removed from the majority of churches as Catholic mass practices have evolved to become more inclusive.

Secondly, this church can lay claim to the oldest organ case in Paris that was originally designed and constructed in 1631 by Jehan Buron. It is still in its original state. Third, as I came back and stood directly in front of the altar, I became aware for the first time that this church was not developed along a consistent central axis. After doing a little reading, I learned that it was originally joined to an Abbey Church, which likely accounts for this unusual alignment.

The history of the site goes back 502 with the burial of Ste-Geneviéve, patron saint of Paris in a basilica built by Clovis, king of the Franks, who was also buried there in 511. The remains of Ste-Geneviéve were destroyed in 1801 and her ashes were placed in the Seine. A few relics of her remain and they are enshrined in St-Etienne. The bottom register of this stained glass window illustrates scenes from the life of Ste-Geneviéve.

As I walked back to my studio, I really felt the cold today. The sunlit skies of the morning had transformed back into the overcast skies that could once again start raining at any given moment. I have been here for 4 weeks now and have not been to those places, yet, where I am supposed to go; nevertheless, I feel as though medieval and French royal history is slowly revealing itself to me in nicely surprising ways.